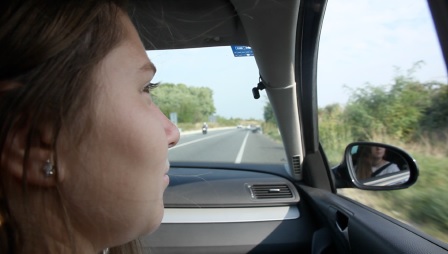 The film tells the stories of Luna, Alessia, Francesco, Edoardo, some dyslexic students, but it could tell many other stories of kids, boys and girls, adult guys and celebrities. People who were outcasts in their society because they didn’t conform themselves to standards in writing or in reading or in accounting. During the film we can see the normal life of these students, going around in their city, meeting their friends, looking for places. We can also see them playing sport, listening to music, learning new things, like driving or riding a bike. School is important for these guys, in terms of time but also as emotional condition, not always positive unfortunately. So we will hear them talk about school and we’ll see them also doing homework. All the locations of the film are emblematic and important to understand dyslexia: the airport for instance would represent the space of complexity; the natural landscape represents freedom and good feelings.

The aim of the film is to show through the simple lives of some dyslexic boys and girls positive aspects of this condition. Dyslexia is not an handicap, it is a different way to see the reality; dyslexic people have many qualities, cleverness and sensibility. They don’t conform themselves to standards and so who doesn’t accept the diversity doesn’t accept dyslexic. In the same way this people don’t accept strangers or other kind of unconventional way of being. For me, dyslexic are important also for overturning stereotypes. This work is aimed at making dyslexia known and accepted as a great worth. The film will use also animation and archival resources. A voice over will guide the spectators through the reflections suggested by images.