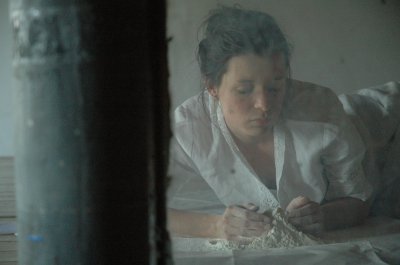 A reading of the work of Italian writer Lalla Romano through the theme of winter which is one of the most poetic of his work.
The camera, often subjective, accompanies a look inside and restless. As if the breath of Lalla Romano went in all the winters of his life and especially a winter that would have changed life: leaving the painting for writing, with the same hesitation of who, in a street campaign, faces a crossroads .
This winter, during the Second World War, when displaced in Cuneo, Lalla Romano translates those who become masters of his life and thought: Flaubert and Delacroix.
Flaubert, Delacroix and Lalla Romano appearing in this documentary as characters and not only as historical figures. In this imaginary dialogue of Lalla Romano with its French masters, songs of the Three Stories of Flaubert and Diaries Delacroix mix poetry, in novels or interviews Lalla Romano as if they were a single stream of consciousness. A third teacher is Elias Canetti. The maximum notebooks of notes Canetti punctuated dialogue on silence, music, memory. The fourth is Joseph Joubert, perhaps the most important master of Lalla Romano. The thoughts of Joubert are recited in French.
The documentary is constructed as a collage of texts written in Lalla Romano sixty years of literary production, photos of his father at the beginning of the century in Cuneo and frameworks paintings during the two decades of his career as a painter.
Four female voices alternate in the video: that of Lalla Romano itself and that of three actresses singing songs composed with the texts of his poems, narrate the relationship with its teachers and interpret his work. The male voice interprets the maximum Joubert.
The put on stage is built with choreography by Enrica Brizzi and four performers-dancers in a former mill.