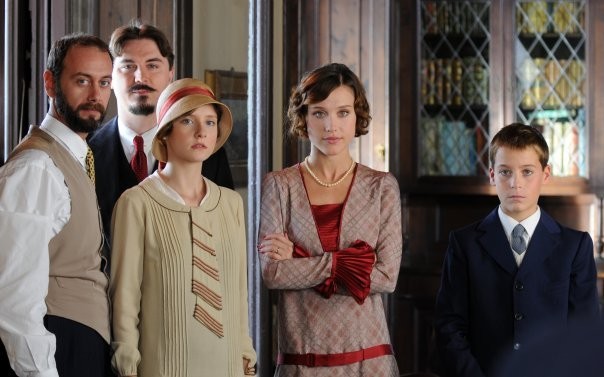 FIRST EPISODE
In 1926 a tramp is arrested while he is stealing a vase in the Jewish cemetery of Turin. When he is taken to the police station he acts crazy and declares he doesn’t know who he is. He is interned in the mental asylum of Collegno, in the hope of helping him recover his past.
One year later, Doctor Rivano, the director of the asylum, reveals the presence of the ‘Man who lost his memory’ to a journalist, Luigi Astolfi, of the Domenica del Corriere, who writes an article which includes a photograph of the man in the asylum. From this moment onwards the case stirs the Italian public and hundreds of people claim to see a likeness between the mysterious man and a relative of theirs who has disappeared. The family that seems the most convinced of having recognized a lost relative is that of Professor Giulio Canella from Verona.
His wife Giulia, a handsome woman who never lost hope of seeing again her husband, missed in action in Macedonia during World War I,  visits the asylum after her brother in law and some friends have already made a series of surprising investigations. Although the man has frequent lapses of memory, he speaks French and Latin well and his manners vividly remind everybody of those of professor Canella.
Face to face with the man, Giulia is speechless. The ‘Man who lost his memory’ also bursts into tears. Their embrace is so moving that the doctors and the chief constable Finucci, who is investigating the case, are all convinced. Astolfi writes a memorable article. The day after the man is freed and entrusted to Giulia so that they can live together with their two children. But what appears to be a happy ending is only the beginning of an enigma which until today, has not been solved.
In a few days the ‘Man who lost his memory’ impersonates perfectly professor Canella, stunning his friends and relatives. Above all however, it is with Giulia that there is a special spark. In their first moment of intimacy, Giulia realizes suddenly that she has made love to a man who ten years before never kissed her nor loved her in such a passionate way. Instead of stepping back she decides to completely let go freely to her new love.
The articles on the ‘Man who lost his memory’ and found his identity and his family again, multiply. Astolfi and many other journalists chase the couple. But there is a ‘coup de théatre’: the day before they are to go back home to Verona, chief constable Finucci arrives with the order of taking the man back to the asylum. The official reason is that of a need to clear some administrative procedures. The real reason is to confront him with a proletarian from Turin which is supposedly the man’s true wife. The ‘Man who lost his memory’  is supposedly not professor Canella, but Mario Bruneri: a printer with Socialist tendencies and above all an inveterate con-man. Giulia is devastated and she doesn’t want to believe the contents of the letter. She decides to go to Collegno.
The confrontation between Rosa Bruneri and the ‘Man who lost his memory’ is dramatic. The man insists in declaring himself professor Canella even when the woman introduces him to her son Giuseppe. Words are no longer sufficient; the law wants a clear identification. Also because the Vatican newspaper, the Osservatore Romano, has begun to set in its front page a hugely relevant ethical dilemma: if the ‘Man who lost his memory’, who should be guilty of having introduced a con-man into the bed of a widow, mother of two?
The reference to the police and the law courts i.e. to the Fascist Government are clear. Slowly the popular adventure of the Man from Collegno darkens and involves new interested parties.

SECOND EPISODE
The police take the fingerprints of the ‘Man who lost his memory’. They are compared to those of Bruneri, which had been kept in the police archives: there cannot be any doubts, they are identical. A series of persons who have been swindled by the printer swear to have recognized him. A former inmate of the asylum even says that during his stay the man had asked him to take a series of letters for his lover, a woman called Milly. She is brought to Collegno and she identifies him for Bruneri. Astolfi immediately understands that she can become an inexhaustible source of revelations and he approaches Milly when she comes out of the asylum promising her fame and success in exchange for revelations.
Faced with the cross fire of witnesses and alleged proof that pin the ‘Man who lost his memory’ to his true persona, that of  a con-man; faced with Rosa Bruneri who confronts her in the corridors of the asylum, Giulia Canella does not draw back one inch: to her he is and remains Giulio, her husband. And she demands and obtains support from her father Francesco, so much so that a man belonging to the Fascist regime: Roberto Farinacci, is called in to act as their lawyer.
The ‘Man who lost his memory’ is spied on, searched, checked in every possible way. When the Man is confronted by father Agostino Gemelli, a personal friend of professor Canella, who bombards him with questions on religion, he cracks up. But even now Giulia’s convictions are not shaken. She is convinced that she has become the victim of a plot.
An endless series of court cases thus begins. Farinacci tries to defend the fascinating idea of an exchange of persons which would have taken place after the arrest of the man who was stealing the vase in the cemetery. According to Farinacci, that night there were two people at the police station: the ‘Man who lost his memory’ i.e. professor Canella, and Mario Bruneri. And, following a series of misreadings the fingerprints of the printer were attributed to the ‘Man who lost his memory’. His contention stands in the first trial where the jury declares it is unable to establish the true identity of the man interned at Collegno.  Giulia has defended the thesis of a supremacy of the spiritual Self over the material Self when faced with the jury. She is happy now also because she has discovered that she is pregnant.
Astolfi on the other hand, is not happy at all. He slowly understands that he has been used by his newspaper and that he has become a pawn in a bigger game, that between the Fascist regime and the Church, exactly before the signing of the Concordat between the two political and religious states. Astolfi however is an ace reporter and he digs into Milly’s past where he finds proof that identify the ‘Man who lost his memory’ as the real swindler. The next four court cases prove him right. According to the law the ‘Man who lost his memory’ is Bruneri.
Years go by. Giulia has two more children from the man she continues to believe is her husband. The final verdict doesn’t allow for discussions or romantic feelings. The ‘Man who lost his memory’ is arrested and put into prison to answer to the charges for which Bruneri is guilty. The curtain falls. The Fascist newspapers are ordered not to write any more about the case and the Church censors its own newspaper, the Osservatore Romano. Astolfi is promoted and moved to other responsibilities in his newspaper. Rosa Bruneri manages to get, who knows how, a new house for herself and her son. The state‘s oblivion falls on the ‘Man who lost his memory’.
In 1934, the ‘Man who lost his memory’ is pardoned and he comes out of prison. Giulia is waiting for him with her children: they are all going to leave for Brazil. When he is given his passport he sees once again a twist of fate: the document bears the name of Mario Bruneri. The ‘Man who lost his memory’  doesn’t care. He leaves Italy hiding his undisclosed secret....