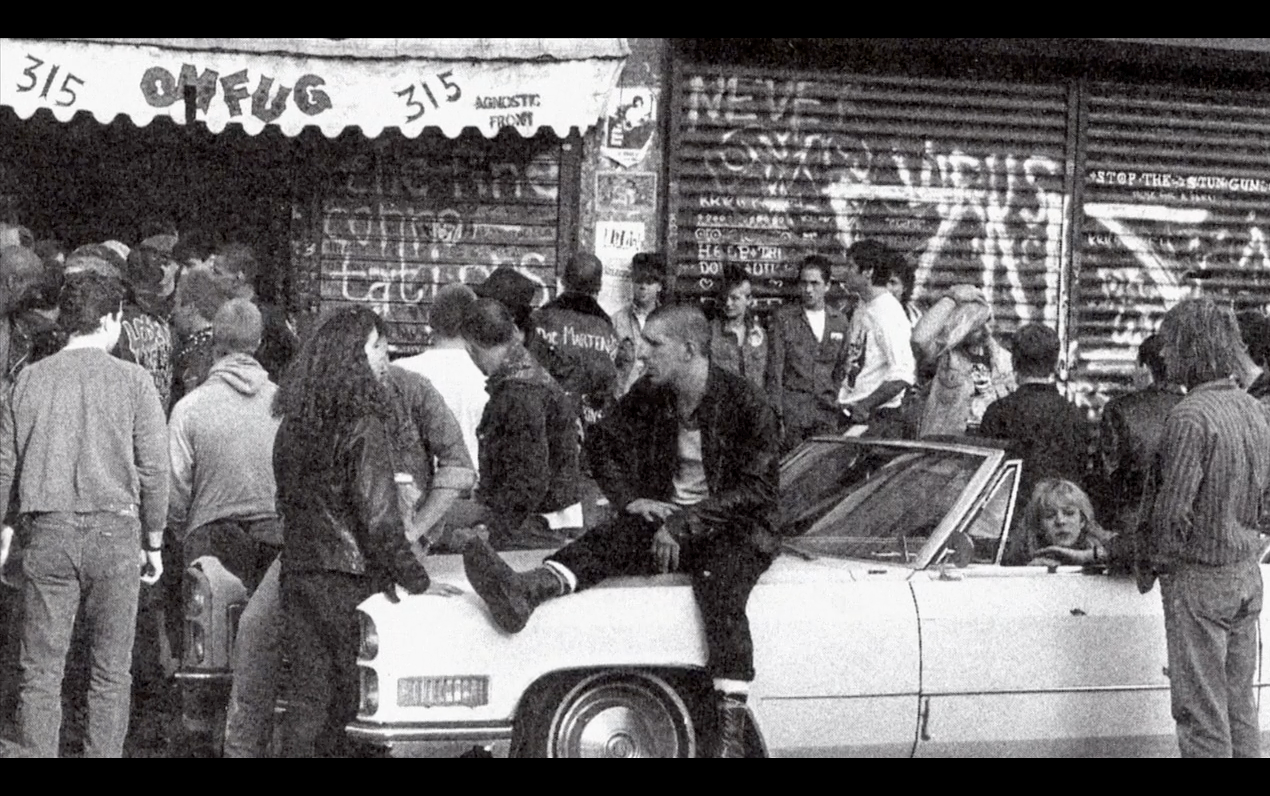 At  the  Matinee  provides  an  account,  through  Walter
Schreifels and his music, of a world that existed in New York’s Lower  East  Side  during  the  80s.  It’s  a  journey  back  to  the sidewalk  outside  CBGBs,  where  on  Sunday  afternoon hardcore  kids,  skinheads,  punks  and  drifters  of  all  kinds would wait to enter the club for one of its concerts. These  characters,  decked  out  in  their  mohawks  or  shaved heads,  either  clad  in  leather  jackets  or  advocating  their vegetarian  lifestyles,  were  a  real  community:  a  varied  and complex  humanity,  who  â€ thanks  to  their  musical  passion, managed to channel their social distress into an explosive and unique form of creativity.
The story started in the 80s and found its highest moment of expression  around  1986.  It  was  a  spontaneous  movement, developed in the shadier parts of Manhattan. This community began  to  see  its  demise  around  1988.  With  the  excuse  of wanting  to  “clean  up”  Tompkins  Square  Park,  or  better described  as  “real  estate  exploitation”,  the  neighborhood witnessed  fierce  clashes  between  the  police  and  the  punk
community.  From  that  moment  on,  this  unwelcome  reality was  forced  out,  only  to  disappear  completely.

In  1989  I  saw  a  photo  in  a  magazine  where  hundreds  of people were entering the celebrated CBGBs. There were also the  members  of  the  bands  that  were  to  play that  Sunday afternoon. I was in Italy, but I wanted to be with those young people. It was 1989 and that was a matinee.  Those  afternoon  concerts  were  one  of  the  most  pivotal events in the New York hardcore scene. It was a time of unity â€ difficult to crack if you didn’t understand the codes and the vernacular within the community. Walter explains how these aspects  were  revealed  in  his  songs,  attempting  to  bring together the various elements of this story. The documentary is not just about a musical scene, but about
describing this scene and the people that were a part of it. It eases its way into the Lower East Side of the 80s, avoiding a mere  philological  recounting  of  the  facts,  but  nevertheless attempting  to  reconstruct  the  mood  and  the  artistic significance of the period.
These  matinee  concerts  were  born  from  a  run  down,
degraded context, and they were nothing more than Sunday afternoon shows.
Walter goes back  to a neighborhood  that has since changed completely to  meet  the  people  who  played  them,  unveiling the remnants of that vanished world.