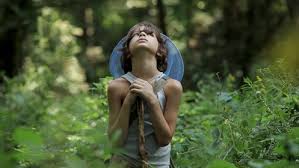 A nature documentary that is really about people – or a feature film disguised as a nature documentary? In any event, this is a film to surrender to peacefully. On a beautiful day in a park life takes its course. The birds, ants, deer and other wildlife take little notice of the human visitors.

We follow five men in particular, ranging from young to old: a boy who seems to get lost, a nudist, a forester, a hunter and a prospector. Their paths do not cross; director Andrea Caccia, who studied painting alongside filmmaking, does not tell a conventional story, but rather observes with a pleasing, calm precision – and allows the viewer to do the same. The extent to which these visitors leave traces in the area becomes increasingly clear, although this is certainly not a critique of man as a disruptor of nature; rather the record of a delicate balance.

I was born in Piedmont, in a small town along Ticino River. After a period in ‘a big city’, I got back to live in the Lombardy Ticino Park, where I grew up. Strolling along my memories and still today along the river or in the wood’s darkness, I often chanced upon ‘ancestral’ characters, people capable of talking to me, arousing my curiosity, scaring and surprising me…Bodies, faces, gestures, shapes, coming from the depth of time but still able to suggest profound and incredibly contemporary meanings for the relationship between man and nature, knowledge and instinct, spirit and body. Stories of a territory that no one has ever told, that led me to make this observational film and resort to a cinematic language that simultaneously embraces fiction and
documentation. The style will be simple yet unconventional. Five characters in one place, five paths that interweave but never crossthanks to ‘alternating editing’. No staging, no magnification. Simple actions. Like a major part of my work, this is a direct yet abstract film, where documentary and experimentation go hand-inhand.