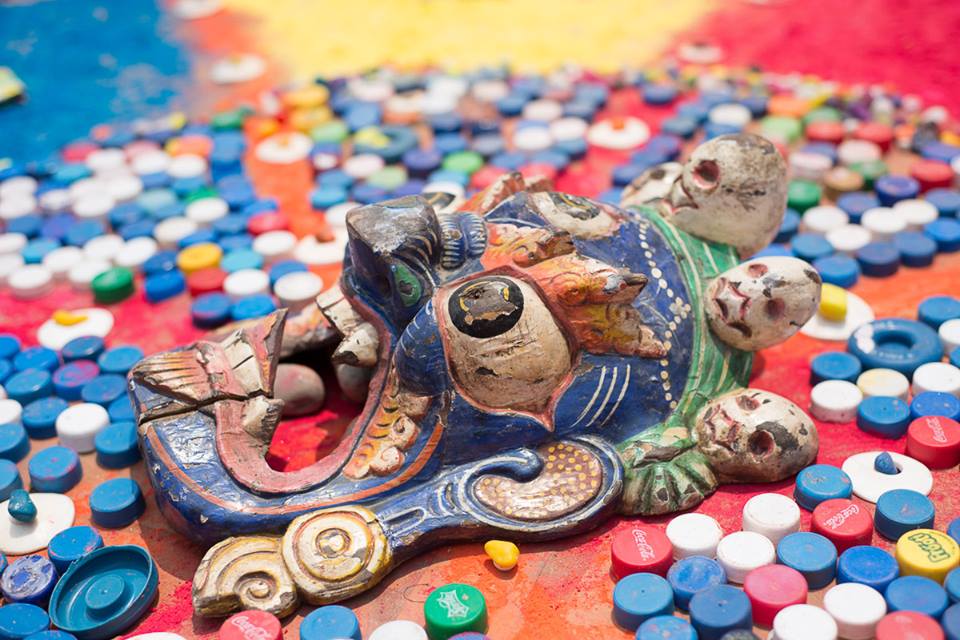 Starting from 2011, an increasing group of eco tourists and volunteers started to collect the garbage left behind by the mass tourism from the Himalayan peaks in Nepal. They are Green Soldiers, the special army headed by Acut Gurung that, as in a Bollywood version of Don Quixote they carry out their everyday fight against windmills made of plastic inside which indifference, derision, ignorance, and a chronic lack of infrastructures – but most of all a gradual and unrelenting loss of cultural identity – hide.
Today, inspired by that vision, the Green Soldiers want to leave an indelible mark, to regain an ancient symbol in order to reconstruct harmony and beauty, starting exactly from what everyone considers to be just scrap: the 3rd of May 2014, after many hardships, radio and television announcements, holdups, authorisations and blessings that never arrived, at the centre of one of the most sacred squares in Kathmandu, the Green Soldiers produced an enormous Mandala, which was not made of sand, but of plastic and other rubbish that came from Nepal’s four corners.

After our previous documentaries, we were looking for a story dealing with present matters, to be seen from a different perspective, far from ours.
We didn't want to simply show the growing of a group of activists fighting to protect their homeland. We wanted to talk about a crash between consumerism or uncontrolled progress (represented by ourselves) and the ancient culture with its myths and rituals, that is threatened by this new influence.
That's why at our glance Nepal appeared as it was in the middle of a traumatic transition, in between a model able to manage itself and another one that is adopting the comforts and the contradiction of a world made of new habits.
We didn't find a solution, but we recorded the attempt to find a third way, symbolized by the creation of a huge Mandala entirely made of plastic.