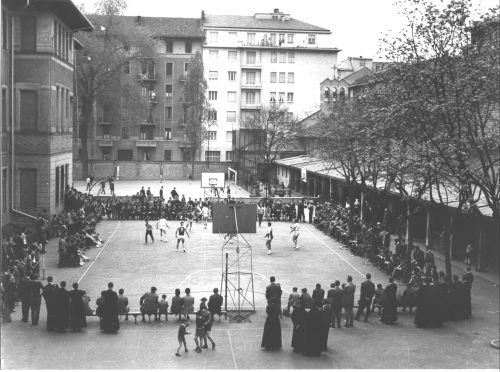 The A1 series championship of 2015/2016 The new Auxilium, In spite of being a well formulated team of talented players
and in addition, having a numerous,passionate audience and
following , this team finds itself positioned to take last place
of the annual classification. The last day of the season May 4, 2016, at last, -victory! Yet it's too early to know whether or
not they have reached salvation from relegation; waiting for
the results from the other matches, seven minutes of waiting; players, managers and the entire hall filled with 4,000 fans in suspense, anxiety, expectation, hopes-finally, the liberating roar, Auxilium is saved ,thanks to a complex ranking play -off system. The story of faith, passion and salvation continues separating and ultimately writing the chapters to follow .. .This is the basic narrative of the documentary which centers around the great figures of Italian basketball who have been with Auxilium from its birth. A history spanning over 50 years of sport, passion,
humanity and entrepreneurship, building a story with a
diverse social fabric in a city under the shade of the mole.

The documentary is a journey between the characters that have shaped the history of the team as well as those who have characterized the birth and after twenty years of darkness, its rebirth. Our intention, through our interviews with the diverse characters, players, coaches and managers of the past and present, is to rebuild faith in the team, a reliable sports path as well as demonstrating both the social and business journey of metamorphosis that is Turin, with all of its noble changes. Healthy sports practices are the genesis of this team as well as the extraordinary motivation of the faith of the fans. Fans of yesterday and today are guided precisely by a strong team attachment which recognize the fundamental values of the sport itself.