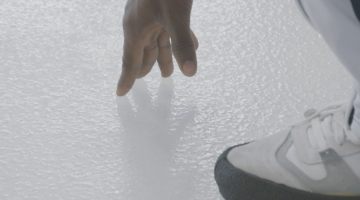 Kebba had never seen the ice before, James yes: but in cubes, and inside a Coca-Cola. When the first cold fell Edward thought he would not survive more than a few days. In Gambia and Sierra Leone, where Kebba, James, Edward, Seedia, Lamin, Joseph, were born and raised, when it is cold, but really cold, there are 15 degrees. Not like in Val Pellice. Here people are used to live with cold and wind. They could have end up in Puglia, or in Campania, like many others asylum seekers, but instead they were sent to these valleys, up North, where villages are slowly dying and the weather is harsh Their life is monotonous, they have little or nothing to do. A monotony broken only by an activity unusual for African people: curling. "Ice Inside" is a documentary that wants to talk about sport, but also, if not above all, of adaptation to different lifestyles, to places, for the most various reasons, inhospitable. The curling field on which these young people meet weekly is made of ice and often made of ice is the wall that separates migrants relocated to small towns in the province and local communities.

Migrants are firmly on the front pages of national and international newspapers, we read and write aout migrants, dozens of films and documentaries about migrants are produced every year. Kebba, Seedia, James, are migrants like many others who come to Italy to escape from wars and persecutions, or just to try to build in Europe a better future for themselves and their families. So why the will to make another documentary about migrants? Perhaps because "Ice Inside" does not want to be a documentary on migrants, but rather a work that wants to focus on their relationship with an hostile territory and an hostile climate, with cold, ice and snow, with the depopulation of mountain villages. A documentary that wants to tell the daily life of Kebba, Seedia, James, and the others, from a different perspective, using the curling team that they have created as a "trait d'union", as a central experience in their adaptation path, as "lifeline" in a monotony that threatens to break their hopes and dreams.