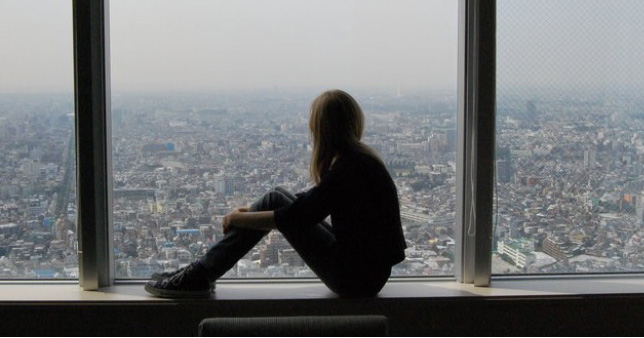 Like many young people, Amanda is at once hyperconnected and lonely. In a metropolitan
odyssey made of unlikely friends and missions, her story speaks about the challenge of
becoming an adult in today’s increasingly fluid and disembodied society; a challenge that can only be faced through a fervid, implacable imagination.

Amanda (28) lives in her own world, made up of extravagant habits, imaginary situations and
few interpersonal relationships. She has just moved from Paris back to her hometown in
Turin, where her family lives and owns several pharmacies.
Despite her reluctance - Amanda feels uncomfortable around most people, especially around the daughters of her mother’s bourgeois friends - she finally accepts to meet Rebecca, a long-lost childhood friend. However, Rebecca turns out to be quite different from Amanda’s expectations and from the lies their mothers tell each other to pretend they have normal and happy daughters.
Rebecca is just as isolated as Amanda. Actually, even more: she hardly ever leaves her bedroom. Rebecca is a “hikikomori”, like many other young people who, in Japan and in the western world, have decided to isolate themselves from society to escape social pressure and competition.
Despite everything, Amanda and Rebecca are able to find their own way of communicating and create an intimate space filled with imagination. But their friendship, though it’s helping both of them come out of isolation, is considered dangerous by Rebecca’s therapist. The two girls are unjustly separated and for Amanda, who thought she could finally share her world with a friend, this is devastating. Nonetheless she recovers and finds, in her own way, her balance because the hope of one day reuniting with Rebecca makes her feel less lonely.

The looming end of one’s twenties is something I relish to observe in others but I dread facing myself. I decided to unload all this weight on the protagonist of the film, Amanda, who embodies and magnifies the main reasons behind my generational pride: an excruciating nostalgia, a symptomatic anxiety, total disorientation and loneliness.

I recently re-read The Adventures of Pippi Longstockings and I tried to imagine her today, all grown up. Before sitting down to write Amanda, I reread many children’s books with female protagonists who are barely teenagers and easily rebellious. The thought of them changing as they become adults made me sad.

What I felt was, in fact, nostalgia, an emotion that my generation could have a monopoly on: our childhood bedrooms and memories are crystallized in a universe totally detached from the rest of our lives. Those times are mythological, lost in the archaeology of the Internet, in the last song of the Pop Stars printed on a poster and folded into four in a teen magazine.

Amanda was also born in the ‘90s, and it shows. I wish for Amanda to resemble Pippi but in a more tragic way, being no longer a child, but a woman almost 30 years old. While Pippi is melancholic but doesn’t know it, Amanda is fully aware of it: she basks in her solitude and in the time wasted, imagining what her life could be like.

I would like this sense of isolation to be perceived throughout the film, in the claustrophobic rooms and in the empty spaces reminiscent of Mid-Western America, even though the film is set in the outskirts of Turin.

The elements that make up the scenery, realistic yet somehow disconnected from time and place, will mirror the same disorientation felt by the protagonists, like a pastiche that follows a lo-fi emotional map, without being intrusive or surreal, but just a bit out of place.

Amanda’s loneliness keeps me company and I wish that those who watch her story, and that of Rebecca, will feel the same. With the same melancholy and the same relief of my favourite films, such as Au hasard Balthazar, Rosetta, Julien Donkey-Boy, Greener Grass, 37 ° 2 le Matin, In the Land of Don Quixote.

Amanda is a dramedy because it is the genre with which I feel most comfortable, the tone that seems to best represent my life, that of Amanda and perhaps of many other people around me.