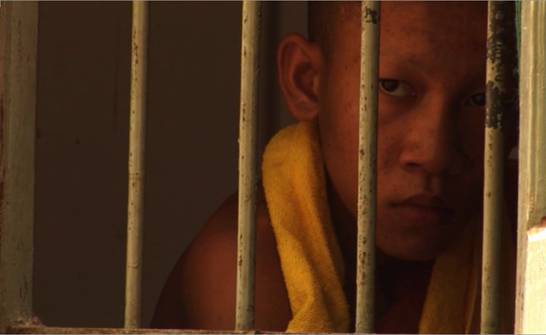 Twenty-five years after escaping Khmer Rouge’s devastation, Tho Nguon receives a message which sends him back to his homeland to retrace his past in the hopes of finding his youngest brother, left behind while fleeing Cambodia.

Shining Gold is a story which begins during one of the worst tragedies in recent history: the genocide which took place in Cambodia from 1975 to 1979 by the Khmer Rouge.

Their leader, Pol Pot, theorized the return of an era in which cities and corrupt governments no longer exist and man lives by working the land. To put this theory into practice a violent social transformation in Cambodia begins in 1975; all cities are evacuated, husbands are divided from wives, children from their parents and any social relationship not authorized by the regime is forbidden. For the Khmer Rouge, the simple act of wearing glasses is considered a symbol of cultural corruption and he who dares to wear them risks his life. In four years, 1.7 million Cambodians die from starvation, poverty, sickness and summary executions.

In 1975, Tho Nguon was 13 years old. Born to an upper middle class family, he went to school, played with friends and lived a normal life. But Tho’s story is that of a young boy who watched his parents and brothers die of hunger and fatigue one by one, forced to work in labor camps for four years. During this time, Tho gets sick and is forced to abandon his youngest brother in an orphanage in the hopes of saving him from starving to death. Eventually Tho is able to escape Cambodia, where he makes his way to a refugee camp in Thailand and finally to Europe. Here he studies, works and gets married, has two children, but the tragic memories and sense of guilt that devastates all the survivors, are never quite forgotten.

Nine years ago Giovanni Donfrancesco, the director of the documentary, met Tho and heard his story. From that moment, he believed that his story should be told, but the idea remained on hold until much later, when Tho called him explaining that he was preparing to return to Cambodia. After the phone call, Giovanni decided to leave with him and to start the film.

What does one feel returning to a country which is yours but at the same time is not? How does one react in front of a man that may be the brother you abandoned years ago and whom you never stopped thinking about but who may also be a simple stranger?  The story of a refugee who goes back to his country in search of a brother represents the story of an entire population. Everyone in Cambodia lost a loved one; there isn’t a single family that has not been touched by this great tragedy. Tho looks for a connection with his land and wishes to alleviate the sense of guilt which torments him. But most of all, his is also an attempt to reconcile a terrible past, repressed for far too long. He needs his memories. Returning to the places from his past, comparing his experience with that of the people that never left Cambodia, Tho Nguon reconciles his two identities: that of a western doctor and that of a witness to one of the worst genocides in history.