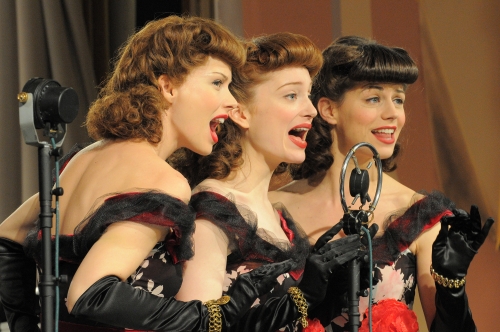 During the Fascist Regime in Italy, three Dutch sisters, Alexandra, Judith and Kitty Leschan, try to make a career for themselves as popular singers.  After various attempts, thanks to their foreign accent, Cetra, the record company, takes them on. The Eiar, that had turned them down at first, reconsiders and takes them on with much higher fees than those offered by its rival company. The girls are obliged to choose the more Italian surname of LESCANO and begin to cut their first records. They become the most popular trio in Italy. Memorable successes are broadcast far and wide: “C’è un’orchestra sincopata”, “Tulipan”, “Maramao perché sei morto” and many others. Because of the Jewish origin of their mother and despite their successes and fame, the Trio is cancelled from all radio programmes and dismissed by the Eiar.

Holland 1924. During a stormy night and among circus caravans, a man leaves his wife, Eva Leschan, witnessed by his three young daughters: Alexandra, Judith and Kitty. Twelve years later, Alexandra and Judith, now twenty, arrive in Turin and move between a modest job at the Caffè Lagrange and theatre auditions where they hope to pursue their life’s dream: to enter show business. Their encounters, first with the variety artist Gennaro Fiore, then with the ‘simpatico’ but devious, Pier Maria Canapa, nicknamed Canapone, changes their lives in a dramatic way. The two unknown Dutch girls and young Kitty – who had meanwhile left Holland with her mother to join her sisters – become, in a very short time, immensely successful. Under the name of “Trio Lescano” they are now unbelievably popular and the mythical stars of those years. While Alexandra and Kitty abandon themselves to the emotions of first love, Judith is increasingly conditioned by ambition. So much so that she drops their first manager, Gennaro Fiore, and clashes violently with her mother, Eva, who tries to warn her daughters about the high price they will inevitably have to pay for the immense success they have achieved so fast. And so it is that the success and the riches the girls - who are Jewish in origin - have accumulated in such a short time attract the attention of the Fascist Regime and that of shady characters who do not hesitate to exploit them for their own benefit. Eva’s prophesy comes true and she is the first victim to be sacrificed precisely when her daughters, now enmeshed in a system they cannot control and is stronger than they will ever be, have to choose between their careers, love and respect for their mother.

The popularity of the “Trio Lescano” grows more and more but Eva’s absence and the lack of her wise advice and loving support saddens the three young sisters. It is an overhanging shadow that becomes a tragedy for Alexandra. Her former lover, the Fascist party member Parisi, orders the deportation to Germany of the cellist Franco Funaro, the new tender and pure love that has lately entered the girl’s life. Alexandra is grief-stricken and so is Kitty who, because of Canapone’s foul play, loses Carlo, the young man who had fallen in love with her when she was not yet one of the “swing queens”. While they continue singing and become even more successful, Italy goes to pieces. Everywhere there are bread lines and homeless in the streets. The Jewish shops are closed down. Eva and her brother Aharon’s family must run away and hide in the mountains. These are the years of the racial laws, of Italy entering the war and even Judith, the more cold-hearted and determined of the sisters, she who is ready to sacrifice all to avoid the penury of her childhood, feels the weight of the thousand compromises she has had to make so far. She is stalked by Piero, a young man who is besotted with her but whom she rejected. He has sworn he would take revenge on her and thus has become a dangerous enemy. Judith realizes that the gilded bubble in which she and her sisters have lived so far is thinning every day more. In one instant the dream turns into a nightmare just as it had begun. The sisters are betrayed by Canapone, who has meanwhile become rich by absconding their earnings. They are also rejected by Ardenzi, a powerful member of the Fascist Party who had always protected them until now when, sickened by the degeneration of Fascist ideals he had believed in, commits suicide. The Lescano sisters are arrested on the basis of the most ridiculous and untrue allegations. They are interned in the Marassi jail where they move from the most glamorous dream-world to harsh reality. Worse, Judith is forced to witness the interrogations and act as an interpreter for the Germans. She has also to witness the executions of prisoners. The sisters live now in a world of misery and bullying which is distant a million light years from their former fairy tale existence when they were carefree and trusting, a juvenile world which they described in their songs over all those past years. When they get out of prison there is only a vague memory of the swing stars that lingers still, but Alexandra, Judith and Kitty have learnt an important lesson. And life will give them another opportunity, that of acknowledging and meeting again the people who truly love them and never betrayed them. Their mother Eva, their friend Gennaro Fiore, Carlo, Kitty’s tender lover. And, at last, for Alexandra the opportunity of reconciling herself with the memory of a father who, in his deepest heart, had never really abandoned them.