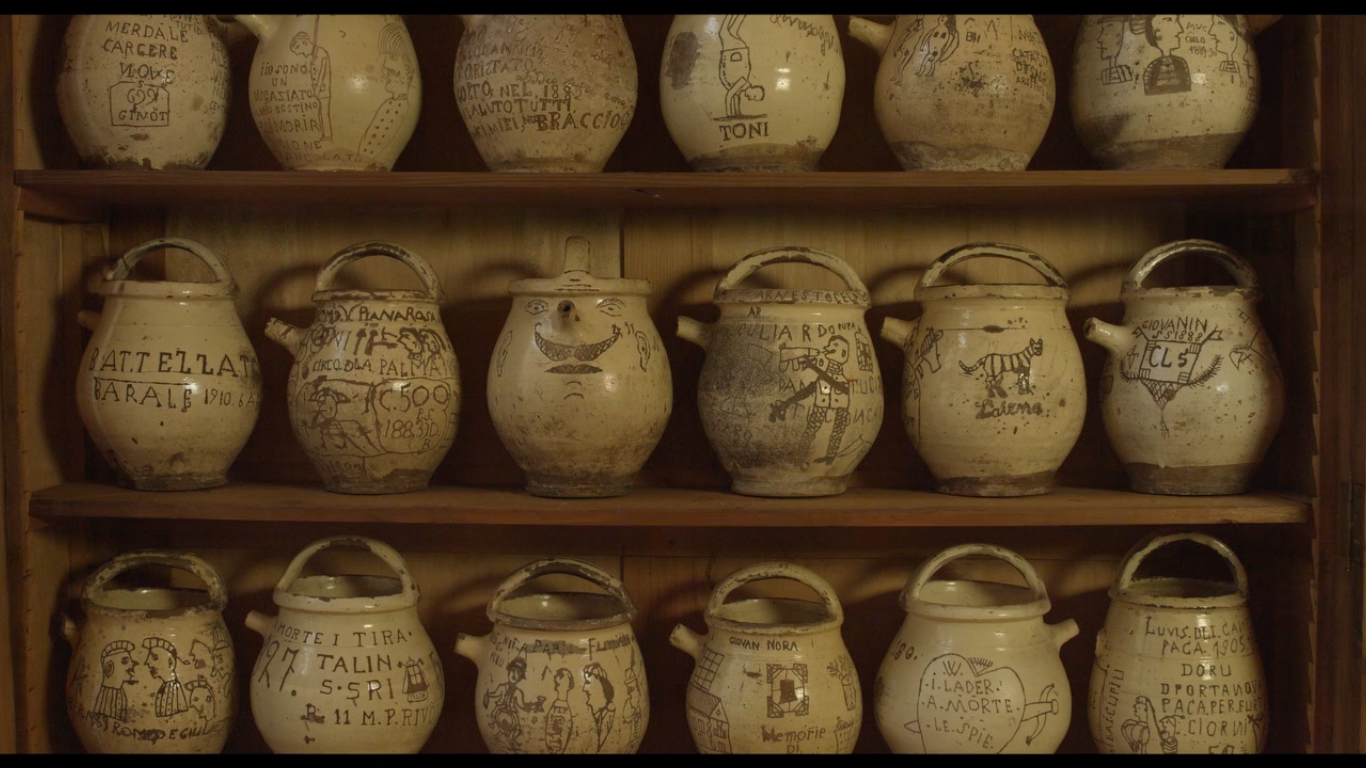 The unhappy Science is a creative documentary on the Archives of the Museum of Crime Anthropology “Cesare Lombroso” in Turin, not about Lombroso himself as scientist
and human being. It is a documentary on the objects of the Museum and the Archives, as a historical sedimentation of life cosmos, of richness of existences, fascination for extraordinary nature and variety of the human being. The objects will be shooted in various modalities and ways, in their context in the Museum (1), or absolutized in a dark and aseptic room (2), with particular camera movements and work on light, lenses, and optics. In off a narrative voice (Emidio Clementi, theatrical performer and musician leader of the indie-rock group Massimo Volume): he will spells the "voices", just few of the thousands possible, in the museum's archive records: psychiatric patients, prisoners, convicts etc. whom wrote letters to Lombroso, in a dense correspondence with him, some time left real big books of biographies. An italian “Spoon River” of the second half of 1800. Along with this, images of Turin, its architecture and its square urbanization, landscape, contextualization of the
Museum: the metonymy of a vision, the science of 1800, of positivism, that in that museum, in that University of Turin had a European king pin, the first propagator in Italy of revolutionary theories, of Darwinism and of a new conception of science and reality. In addition, the images will be intersected by archival material, in found footage, released by the Archive of the “National Cinema Museum of Turin”, above all the reels of “La Neuropatologia” (1909) by Camillo Negro, a disciple of Lombroso, who filmed patients , prisoners and psychiatric hospitals.

The unhappy Science is a speech about the relationship between scientific research and human existence, about man as natural and cultural being, about positivism, about science that continually seeks out its limits, overtakes them and seeks new ones (for this always unhappy, sic!), at the end about the beauty and extraordinary nature of the human
being. The unhappy Science is the science that proceed by continuous errors, by approximations; and that even when he discovers something, look soon for the new limit to break, the new barrier to deal with, look for the new mistake, the new ignorance, the new borders, as well as continuously looks for the falsification (Popper) of his theories. The science is always unhappy, because it is always looking for its failure and its limit. The unhappy science is the great nineteenth-century science, of the great and long-century (of which the twentieth century would be the natural corollary). The unhappy science is the compulsive ferment of cataloging and analytics that founded the first steps of medicine, anatomy and the first hints of Neurology. The nineteenth is not only the century of Lombroso faults, but also the century of the errors of his colleague and competitor Giacomini, of the rival remote Nordau, and Freud. The nineteenth century is the century of the great science on which errors has been built - the midget on the shoulders of the giant - all development of neurology and cognitive science. The nineteenth century is the century of the forest fractal theories wrong, revolutionary and reactionary that continually get confused, among the most apparently democratic and progressive have given the most degenerate and classist developments, and those apparently most negative in their logical consequences, actually they were the most "human". This film is thus a creative documentary about that unhappy science, in his historical relapse material in the present, beared by the endless collection of objects of the Lombroso archive and the Museum of Anatomy (connected to the museum Lombroso), able to show - through anxiety of catalogation - the humanity in all his expressions, through the bodies, faces, tattoos and artifacts. The film will be organized into chapters dedicated to the body (body, faces, tattoos, sections), insanity (artifacts and art brut), prison (prison photos, models of imprisonment).